Nuclear power programmes can benefit society through the creation of high-quality employment opportunities while providing secure, reliable energy supplies, but the industry must make sure it engages in open and transparent communications with stakeholders, as well as being cost-competitive with all other forms of generation, if those benefits are to be realised. These were the feelings from an international high-level panel of nuclear industry and academic experts at World Nuclear Association's Strategic eForum 2020. 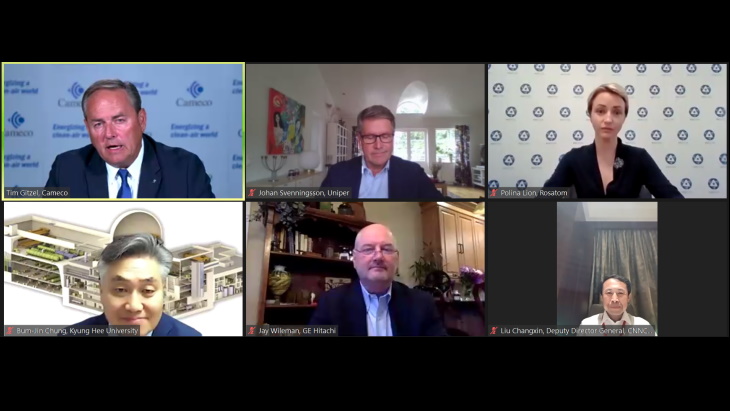 The high-level panel - Maximising nuclear energy's socio-economic and environmental benefits - was chaired by Cameco CEO Tim Gitzel and brought to a close the Association's three-day eForum, following panels on Building a stronger and cleaner tomorrow with nuclear energy and Driving investment towards nuclear projects. It examined amongst other things what the industry can do to reinforce support for nuclear energy as well as the broader benefits of nuclear power projects for the countries hosting them. "We want to discuss today how we can generate jobs and make energy cleaner," Gitzel said.

Nuclear power is cheap and environmentally friendly as it does not produce greenhouse gases, but this is not very well known by the public, said Professor Bum-Jin Chung of Kyung Hee University, South Korea. What is worse, he said, people "tend to be afraid of nuclear power,"  possibly due to the spread of "fake news". This public fear can be easily exploited by politicians to improve their approval rates, he said, which had been the case in South Korea.

The benefits of nuclear energy cannot be realised without the deployment of more nuclear power plants, but negative public perception is hindering nuclear expansion, Chung said, and this must be mitigated by better communications. "We have tried reaching out to the public but we've failed. Communications should have been more effective. We should have answered the questions the public raised, instead of repeating clichés on economics, safety and greenhouse gas benefits of nuclear power. We should have studied the fake news and debunked it," he explained.

Liu Changxian, deputy director general of CNNC International, said the commercial operation of Tianwan unit 5 - which was announced on 9 Setpember - was "good news" for China and for the world nuclear industry. China now has 48 reactors in operation and 14 under construction, with more construction starts due to begin on another four units soon, he said. "We believe in the role of nuclear energy for the social, economic, and also environment [benefits]," he said.

Rosatom Chief Sustainability Officer Polina Lion spoke of the Russian company's experience of developing projects in 50 countries. Different countries - such as Bangladesh, Hungary and Egypt, where Rosatom currently is involved in new-build projects - present different requirements and conditions in terms of economic development, energy systems and seismic systems, and nuclear plant proposals must be adapted to account for a given country's needs. However, "in all cases", she said, customers are interested in the other benefits a nuclear construction programme brings beyond establishing a secure, low-cost source of electricity, such as new jobs, a boost to higher education and local infrastructure improvements.

New build proposals should therefore present a combination of commercial, technological and socio-economic parameters, but must not neglect the ecological and climate parameters, Lion said. Nuclear has "almost the same" carbon footprint as wind power, she said, yet the current European growth in demand for renewables is "contradictory". The European Union's sustainable finance taxonomy puts nuclear in a "grey zone", but there is no doubt within the nuclear community that nuclear energy can make a valuable contribution to sustainability and carbon neutrality - and the COVID-19 pandemic has "only confirmed" that nuclear guarantees a stable supply of electricity with high safety standards which secures many thousands of jobs, she added.

The perception of nuclear energy's sustainability through Europe and beyond influences the mindset of local communities and authorities but also of banks and investors, Lion said. "I absolutely agree with my colleagues [on the panel] that our joint efforts should be about communication … of the incredible details on the impacts of nuclear energy on sustainable development."

Several new countries are building or considering nuclear power, Johan Svenningson, country chairman of Uniper Sweden, said, in efforts to ensure secure energy production at the same time as fighting climate change. Nuclear projects provide economic growth and stimulation as long-term, high-tech projects but also by providing decades of reliable, fossil-free energy, he said. "A country's wellbeing and economic development is dependent on energy supply," with the availability of high-quality energy at an affordable price leading to a higher level of prosperity, he said. As well as new build, we need to protect the existing nuclear fleet to ensure a base of carbon-free energy supply, he added.

Nuclear, as a "high-tech" industry, primes high-tech job creation, providing further opportunities. A nuclear plant has high upfront costs, but will run for 60, 80 or more years during which time it will create a high number of jobs and other benefits, he said.

"We as an industry are good at talking to each other, but we need to be more vocal. We need to be out in our societies and spread our word," he said. This must be done to counter "strong antinuclear voices", particularly in Europe, that want to stop the expansion of nuclear and an EU hydrogen strategy founded on renewables and natural gas.

When looking at the environmental and socio-economic benefits of nuclear, the environmental benefits are "very, very clear", GE Hitachi Nuclear Energy President and CEO Jay Wileman said. In the US alone, current nuclear capacity avoided the emission of 476 million tonnes of carbon in 2019, he said. Looking at the socio-economic benefits, the jobs benefit from nuclear extends beyond the several hundred jobs at each power plant to the full supply chain, which is both local and international, as well as secondary jobs supporting that infrastructure.

"All of those great things about nuclear are fantastic … and we need to continue telling that story," he said. "But none of those benefits will be realised if we can't drive down the costs of nuclear … we need to bring those benefits of carbon-free nuclear, but making it cost competitive with all sources of generation whether it be wind, combined cycle gas, or whatever."